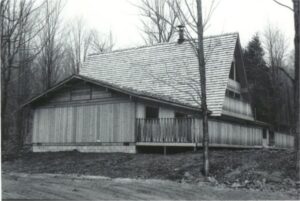 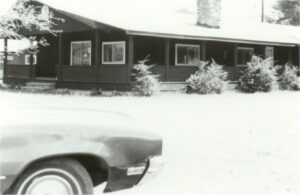 A BRIEF HISTORY OF

The lands of Robert Gonzales included the Stonehouse, stables, guest cottages (old Administration building on Calypso Dr. now removed), Sports building (now the Adult Lodge) which contained a huge stone fireplace and bar, a two lane bowling alley and stuffed animals. This was formerly known as Mr. Gonzales’ recreation area for his family as well as for his guests. The Rockledge Pool was put in by Paul Evans for Mr. Gonzales. A waterfall over the rocks was in operation with colored lights. This was a magnificent sight at night. The well at the stonehouse supplied water for the stable, guest houses, pool and the drive through barn. Mr. Gonzales had Paul Evans of Newfoundland construct Deer Lake as you see it today. At this writing Mr. Gonzales resides in Costa Rica.

Properties began to sell in 1971 but it wasn’t until February 15, 1973 that the Wallenpaupack Lake Estates Property Owners Association was incorporated and title to the Amenities and common areas were vested to the Association, as Beneficial Owner.

The first meeting of the incorporator, Patricia A. Aber, was held on the 20th day of Februaury, 1973, at 2:00 o’clock in the afternoon, at 104 West High Street, Milford, Pike County, Pennsylvania. Patricia A. Aber appointed Betty Jean Baily as temporary secretary of this meeting.

It was at this meeting that the first form of By-Laws for the regulation of the affairs of the corporation was adopted. It was also at this meeting that directors were nominated to hold office. Those nominated to serve were Hugo Palm, David E. Walker, and Robert E. Barnes. Robert E. Barnes acted as Temporary Chairman, and Davis E. Walker was appointed Temporary Secretary of the meeting. Hugo Palm who, at that time, lived at 42 Aquarius Drive, Section 4, with his lovely wife, Rigmor, became the first President of the Property Owners Association. David E. Walker became the Secretary – Treasurer.

Building activity at the Estates began in earnest in 1972. Dock slips were added, the Campground’s 33 camping pads were completed, building plans for the Main Clubhouse and the Beaver Lake Clubhouse were awaiting approval from the Township, and three wells for the water system were bored and tested.

The Department of Environmental Resources approved the plans for the entire sewerage collection system, and in April of 1973, the Bonham General Contracting Company of Honesdale, PA, started work on the sewer and water systems in Section 1.

The development of the Estates was in full swing and in July 1973, the Beaver Lake Clubhouse, swimming pool and wading pools were now opened for use. The contract for the Beaver Lake Dam was signed in 1973 and the project was completed in the fall of 1974. Construction of the Main Clubhouse, Section 4, started in May 1974 and was completed in August of the same year.

As for trash collection, arrangements had to be made by the property owner for a pick-up at their site. The trash collector used at that time was Butler Sanitation who, by the way, is still in business. Even though Butler made every effort to collect the trash, the animals were there tearing into the plastic bags and strewing the household trash all over before the trucks would arrive. Because of this, the Estates began to look unsightly, so the Board of Directors began to look into getting dumpsters for trash collection. Dumpsters were placed by the Main Gate, the West Gate, and the Campground. (However, after many years of abuse by outsiders, and the increase in home building, the Board removed the small dumpsters and established a general area for trash collection behind the stable.) 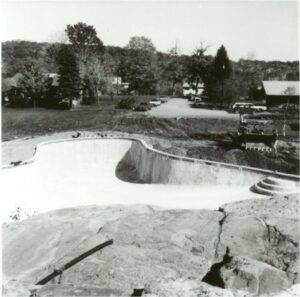 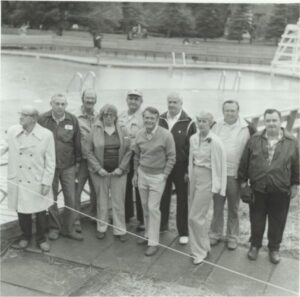 1975 was the year of changes. A group of property owners became aware that the developer was having financial difficulties.

The Governing Board (now known as the Advisory Board) was born on September 28, 1975. An election was held to have four members from each section serve on the Governing Board. Those elected were:

The following committees, with an appointed chairperson, were then established:

The Governing Board met once a month at the Teen Center (now the Adult Lodge).

The Governing Board sent out a mailing asking for each member family to send $5.00 so that an attorney could be retained for the purpose of obtaining information from the developer. On December 7, 1976 a letter was sent to the membership requesting an additional $25.00 to continue legal action against the developer. The Board received an abundance of checks, all of which were deposited in an account and used for legal fees.

When the Developer was foreclosed in February of 1977, Section 6 and parts of Sections 4, 5, and 7 were left without sewer and water. Several homes were without sewer and water adding an additional burden to these property owners. In some parts of Sections 4 and 5, the sewer and water lines were in, but a pumping station was needed to bring the system on line. On September 30, 1978 the pumping station was approved and construction was completed in 1979 by CW Sales Corporation. The monies for this project came not only from the Sewer & Water account, but also from the property owners through the purchase of a Bond for this purpose.

On March 17, 1984 a Special General Meeting was held to vote on the completion of the sewer & water system in Sections 4, 5, and 7. It was at this meeting that the property owners united together and voted to complete the system. The membership also voted to levy a $200.00 assessment on themselves in order that their fellow members could finally have the opportunity to build and connect to the sewer & water lines. This act certainly showed the community’s compassion for one another and how they worked together at that time.

On March 9, 1985 Allan Meyers Construction Company of Exeter, PA was awarded the contract to complete Sections 4, 5, and 7, most of which was constructed with a “pressure sewer”, which required a grinder pump. This project was completed in October 1985.

The most interesting fact concerning the treatment plant and system is that, as an owner of property in the Estates, one legally became an owner of this utility. What an asset!

As time went by, there were many changes to our community. At the Annual meeting of June 11, 1983, the membership voted to accept the Agreement of Settlement between FinanceAmerica and W.L.E.P.O.A. This agreement allowed for a lot exchange for those members in Section 6, which would not be developed. Those members could exchange their lots for another FinanceAmerica lot within the core of the Association. This procedure was done through a drawing. The set-up for this exchange was extremely tedious and many hours went into arranging for the exchange by the Office staff and the Directors. However, it was completed and there were but a few who did not participate and are still a part of Section 6.

There was a tremendous amount of work done by so many property owners to keep W.L.E. active. Recreation was responsible for having property owners work together and have various parties and games. As a community, we stuck together through the tough times and fought all the problems that faced us. Even when FinanceAmerica foreclosed on the developer and locked up all the amenities, the property owners who cared were not stopped. The locks were cut and the members again joined together to keep up the amenities by giving of their time and yes, sometimes even money.

As you can see today, we have a wonderful community that is constantly growing. We can thank the pioneers of W.L.E. for making this all possible.